GISWatch 2015 – A policy landscape of sexual orientation, gender identity and the internet 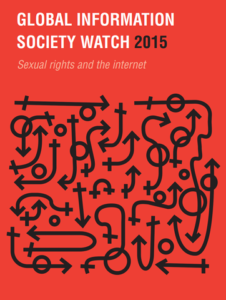 Two groundbreaking advances in international human rights have been made in the last half decade, with recognition by intergovernmental bodies that human rights law applies equally to all persons regardless of their sexual orientation or gender identity (SOGI), and that human rights law is equally applicable online as offline. However, these achievements have not been without significant advocacy efforts by civil society. While internet rights are being increasingly integrated and addressed across the international human rights system, developments on SOGI have been laboured, politicised and isolated, with no state consensus. This report considers the trends, shifts and convergences in international policy making, using a geopolitical analysis.

Activists have been advocating for international recognition of SOGI-related rights as far back as the Beijing World Conference on Women in 1995, with concerted efforts to develop state awareness and recognition of the issues since a failed resolution on human rights and sexual orientation in 2003. Brazil’s introduction, and later withdrawal, of a draft text was a catalyst for a number of civil society groups and activists working on sexuality and gender issues to communicate and coordinate more consistently to develop strategies to engage the UN human rights system on these issues. This collective organising led to states delivering a series of joint statements at the UN General Assembly and Human Rights Council (HRC) between 2005 and 2011; 4 increasing support for SOGI rights from a handful of countries to nearly half of the UN member states; and finally the adoption by the HRC of the first ever UN resolution on “human rights, sexual orientation and gender identity” in June 2011, and the second in September 2014.

Although civil society has been involved in internet policy and governance spaces since the internet was created, the internet has only recently featured in international human rights policy development arenas. The impact of the internet on human rights was first recognised at the international level by an HRC resolution on freedom of expression in 2009. Since then, the UN has adopted a number of resolutions developing international policy on this theme. In particular, the HRC adopted a resolution on “The promotion, protection and enjoyment of human rights on the Internet” in June 2012 with 85 state co-sponsors, which affirmed that the same human rights apply online as offline. The following year in November 2013, the General Assembly adopted a resolution on the right to privacy in the digital age, which was followed up by the HRC in March 2015 with a procedural resolution of the same title, creating a UN expert mechanism on the right to privacy. 10 Since the 2009 resolution on freedom of expression, a number of thematic UN resolutions have addressed internet rights

You can read and download GISWatch 2015 – A policy landscape of sexual orientation, gender identity and the internet thematic report here