One of the oldest organizations, the Women and Media Collective was formed in 1984 by a group of Sri Lankan feminists interested in exploring ideological and practical issues of concern to women in Sri Lanka. Since then we have been actively engaged in bringing about change based on feminist principles in creating a just society that does not discriminate based on gender. Our work has contributed at different moments in time to social and political change, the inclusion of women and gender concerns in the peace process, increased state recognition of women’s rights, the enactment of new legislation or legislative and policy reform promoting and protecting women’s rights, and recognition for the need to increase women’s representation in politics. By engaging with policy initiatives taken by the state, we have been able to contribute to the formulation of the National Women’s Charter, the National Action Plans for Women and the Migrant Rights Policy. We also co-ordinated the CSO campaign which resulted in the enactment of the Domestic Violence Act of 2005 and we has engaged in policy discussions related to women’s land rights, single women and female heads of households, peace-making and peace-building, and media reforms among others. We have helped initiate women’s networks and continue to work with a range of organizations from grassroots level local women’s organizations to national level institutions, which have a direct voice in policy formulation and implementation. Thus, we act as a bridge that closes the gap between high-level policymaking and the marginalized in the work for promoting and protecting women’s rights. WMC structures its work under three broad thematic areas: State and Politics, Gender Identities & Sexuality and Media. 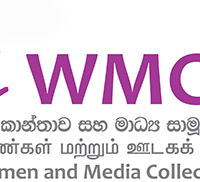